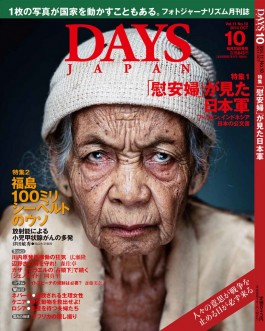 Comfort Women on the cover of Japanese magazine ‘DAYS JAPAN’

On September 20, the Japanese photo magazine DAYS JAPAN will run a portrait of ‘Comfort Woman’ Wainem on its October cover, and 6 more inside pages about this subject. Wainem is an Indonesian woman who during WW2 was dragged from her home and forced to serve as (unpaid) prostitute for the Japanese military for two-and-a-half years. She and the others in the DAYS JAPAN publication were portrayed by Dutch photographer Jan Banning and interviewed by Dutch journalist Hilde Janssen for their books (and exhibition) Comfort Women and Schaamte en onschuld.

The publication will almost certainly lead to controversy in Japan. The subject of Comfort Women continues to be an embarrassment to Japan and an obstacle in its regional foreign relations, as Japanese officials deny that up to 200,000 ‘Comfort Women’ were pressed into wartime sexual slavery in military brothels in the countries that Japan occupied during WW2.

On July 24, 2014, the UN Human Rights Committee, composed of independent experts, (not for the first time) called on Japan to apologize to these women. But the next day, Tokyo rejected this UN call to accept the blame. A strong section of the political right, including Prime Minister Shinzo Abe, continues to claim that the brothels were staffed by professional prostitutes. These right-wingers assert that there was no evidence to corroborate the comfort women’s testimony on sexual slavery.

Proof that ‘Comfort Women’ were being forced to serve as sex slaves has been piling up for many years. In 1993, Japan started an investigation after which the then chief cabinet secretary, Yohei Kono, acknowledged that the Japanese military had been “directly or indirectly involved in the establishment and management of ‘comfort stations’” and that young women from China, Korea and Southeast Asia “in many cases were recruited against their will.”

The present government, however, wants to review this Kono statement. The recently appointed ultra-nationalist MinisterSanae Takaichi of Internal Affairs & Communication stated that she wants ‘to dispel false information reported worldwide that will continue to undermine the honor of the country and its people into the future.’

In this atmosphere of revisionism, Japan’s second biggest national (liberal) newspaper Asahi Shimbun came under attack, these last few weeks, because of a publication on comfort women dating back to 1982. In this article, a Japanese war witness, Seji Yoshida, confessed that he had ‘hunted up some 200 young Korean women on Seju island.’ In the 1990s, this confession turned out to be false. But only recently, in September 2014, the Asahi Shimbun came under heavy pressure from ‘revisionists’ to apologize for this 1982 article. Their negligence, the revisionists claim, has seriously affected Japanese dignity and honor. At the same time, they suggest that the forced prostitution story is untrue and that the Kono Statement should now be reviewed. Both the Asahi Shimbun and the UN deny this claim: there are many other testimonies and pieces of evidence of the existence of this form of state-organized forced prostitution.

In the light of these developments, The DAYS JAPAN magazine publication is a remarkable and brave act.

For the english version of DAYS JAPAN’s text, see all the way at the end of this post.